Home Commerce Are Robots About to Take Over E-commerce Warehouses?
Share

Over the last several years, we have seen an expansion of e-commerce. Companies like Amazon and eBay are trying to improve their operations. This means decreasing delivery time and delivery costs, as well as reducing the mistakes when it comes to delivering the packages to consumers. In most warehouses, there was some form of robots, usually the ones that do simple repetitive work. But with requirements increasing, and with artificial technology improving we are now faced with implementation of newer and better robots. These robot improvements should have the goal to cut the costs of operations and improve logistics in warehouses. Soon we might even see robots delivering our packages. So how exactly are these innovations changing the industry?

How it all started

It had to start somewhere, so which company was doing it before it was cool? In 2011, Amazon started using robots in their facilities. These robots, made by Kiva Systems – a robotics company from Boston, helped Amazon revolutionize its warehouses. Amazon went a step further and bought Kiva robots, which prompted other companies alike to follow suit. However, these robots were not working on their own – they were teamed up with people.

This perfect blend of workforce, allowed Amazon to cut operation costs and make their warehouses more efficient. Taking a package off the shelf and preparing it for the shipment used to take around an hour and a half. Now, that time is reduced to mere 15 minutes. 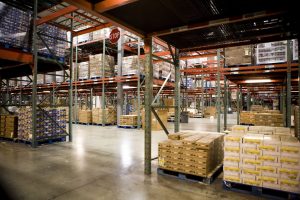 Manufacturing robots for warehouses is currently a lucrative business, since there is a high demand for them. The need for robots is constantly rising and is not expected to go down any time soon. After Kiva Systems was bought out by Amazon, other robotics companies had to emerge. One of the names worth mentioning is Grey Orange, a company from India which developed The Butler System. It can pick up portable shelves and bring them closer to human workers to make their job easier.

Hitachi made a breakthrough when they developed a system that can pick items from shelves and put them inside shipping containers. Fetch Robotics also made a system – Fetch and Freight robots – that can pack the item. Fetch, as the name suggests, finds and picks items off the storage shelving after which Freight will deliver those items anywhere in the warehouse. In the future, we might even see robots deliver our packages to our doorsteps. There are already plans to make delivery drones that can carry packages quickly and safely.

The advantages of robots

The trend of incorporating robots into warehouses only keeps getting bigger. There are numerous reasons for this, of course. The e-commerce business is expanding and with it the speed at which packages need to be packed and delivered. Robots make this job a lot easier for their human counterparts. Robots can perform certain tasks faster, and they lower the cost of operations. They can work without breaks, seven days a week, and they don’t take absence from work.

They do not require any training, since they run on pre-programmed software. Robots don’t need health insurance, which saves company a lot of money. Holidays are a very busy time period for warehouses, as that is the time when people order more things than they usually do. Therefore, the workers are in a constant rush to deliver presents to everyone, in time. Using robots cancels the need for extra help as robots can work non-stop. These robotic systems are expensive, but they save money in the long run and their prices are likely to drop as they become more common.

Robotic helpers are becoming more and more popular in warehouses as they can work without breaks, they reduce the overall operation cost and they work faster than human workers do. But there are no completely automated warehouses yet, because the robots still function best when surrounded by people.