Does the smart home need a new network? Some really big companies have created Thread, a new standard that aims to supplant Wi-Fi, Bluetooth and ZigBee as the ideal radio tech for the home.

Samsung, ARM, Nest and four other companies have gotten together to build a new radio standard for the smart home. Dubbed Thread, it is a low-power, mesh network protocol that also supports IPv6. The standard is built on the existing radio hardware used by ZigBee devices (802.15.4), which means that a company could update its ZigBee devices to support Thread with software if it chooses.

Thread ApplicationsSo does the smart home need a new networking protocol? I think “need” may be a little strong, but there’s certainly a lot of appeal in designing a radio protocol from the ground up. And outside of the companies above, Freescale, Silicon Labs, Yale Security and Big Ass Fans also agreed. Chris Boross from Nest Labs, who is involved in the Thread Group, ran through the issues associated with other radio technologies during an interview Monday.

What’s the matter with Wi-Fi?

According to Boross, Wi-Fi is both power hungry and made for big data while Z-wave is controlled by one company. Bluetooth is low-power, but while the standard is being tweaked to accommodate a more mesh-like structure, it’s not a true mesh network. It also doesn’t yet support IPv6 in the real-world implementations but the specification does allow for it. ZigBee has a range of issues, but suffers in part because it has so many variations that the standard is not as standardized as consumers would like.

To address these perceived flaws and others, the Thread networking protocol supports IPv6 using 6LoWPAN, which is a way to adapt the heavier IPv6 capability for a power-and-packet constrained network. It also can support a mesh network of 250 devices or more. This may seem like overkill, but if you tally every light bulb in your home, every outlet, every switch and then start adding sensors and fun devices, that number starts making sense.
A Big Ass Fan that could one day include Thread.
There are two challenges associated with getting a new radio standard into the mass market — even if it’s a software upgrade to an existing radio found on plenty of existing devices. The first is convincing device makers to put an 802.15.4 chip inside everything from a phone to a hub and the second is making sure the standard is really a standard.

You gotta make them love you!

To solve the first problem, using existing radio hardware is a good first step. It’s a lot easier to convince device manufacturers to send a software upgrade to add Thread support to existing ZigBee stuff than it is to convince them to add a new radio. But Thread does have an issue in that so far, ZigBee isn’t popular on tablets or phones, which are the dominant means of controlling a smart home today.

Luckily most hubs on the market have ZigBee radios and service providers such as Comcast are even embedding ZigBee into their set-top boxes. So while, at first you might need a hub or gateway of some sort to control your thread devices, if it becomes popular, then perhaps Samsung, Apple, Asus or another phone or tablet manufacturer adds a new radio. Boross declined to comment on Samsung’s plans for thread, although it could push adoption with the addition of a thread radio in all of its phones.

As for the second problem of creating a true standard, the Thread Group is taking a page from Bluetooth and Wi-Fi. Much as the Wi-Fi Alliance certifies all Wi-Fi devices, the Thread Group plans to provide similar rigorous testing, certification and enforcement. ZigBee actually lost ground with device makers because it fragmented its standard so much that the devices weren’t actually interoperable. It’s trying to repair that damage now, but it still has two versions of ZigBee for the consumer and pro markets. 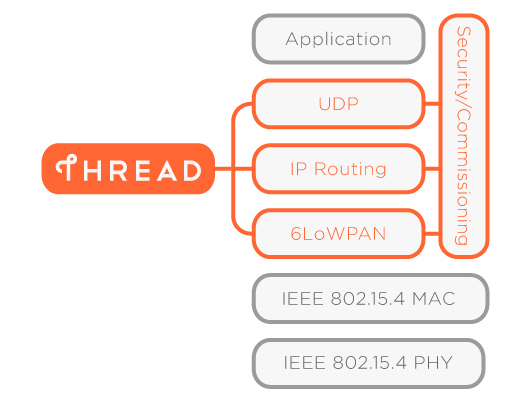 TG_SimpleSecureScaleable_illo_v2
Finally, for those confused about how Thread might fit into the bigger picture, this is a radio effort, so things like HomeKit, Nest’s Developer program and even Qualcomm’s AllJoyn would work on top of Thread. The goal here is to supplant Wi-Fi and Bluetooth as the de facto standards for the smart home.

What are the odds?

Today, the Nest thermostat is running a version of Thread, and later this year the spec will be defined enough that other manufacturers could start building Thread-based products. Boross said that the thread Group will start certifying devices in mid-2015, which means that while companies may support thread and build it into their products, there won’t be certified devices until the middle of next year.
Thread inside.
Will this succeed? It’s tough to say. In may ways this will add to consumer confusion, and there are smart people at many chip companies that make Wi-Fi and Bluetooth chips trying to tweak the radios for more efficiency in the smart home. That being said, connected devices do behave differently from laptops or phones, and building a radio specification optimized for those devices — especially when we’re anticipating so many of them isn’t crazy.

The Thread backers have done what they can to mitigate the risks that new radio specifications face and certainly have a lot of marketing product muscle. I’ll be eager to see the first devices to get the Thread seal of approval. If we see hubs and vendors like GreenPeak, which sells ZigBee chips into set-top boxes, then this Thread protocol might lead us to a better connected home network.