Opera now has an inbuilt advert blocking feature in its browser. This means users can  now surf the web without seeing ads. This according to the company is to load web pages faster. Breaking this down further, Opera says  web pages will load 90 percent faster than Internet Explorer and 45 percent faster than Chrome.

But how did they arrive at these figures?

In a post by Krystian Kolondra, senior vice president of global engineering at Opera, “These results are from the test we have done on 66 content-rich websites. The machine has an AMD Phenom II X6 processor with 8 GB of RAM and is running on Windows 10 64-bit. We have done similar tests on various systems. The percentage remains very similar, while the average loading time of particular pages varies. 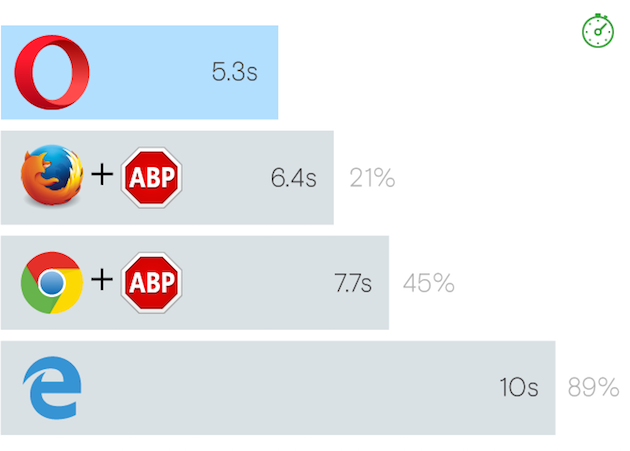 For the testing, we used WebDriver and repeated page loading time for each site 15 times. The time shows median for loading a page between navigationStart and loadEventEnd events.”

Publishers who run ads on their sites may push back at this thereby forcing users to use other web browsers. According to the figures below obtained from W3 Schools, Opera web browser still lags behind Chrome, Explorer, Firefox and Safari.

In  CNBC post, its is estimated that Ad-blocking cost digital publishers about $22b in 2015 alone with around 198 million global people using the software, according to a report by PageFair and Adobe. Top sites like the New York Times have started asking people who use ad blocking software to rather purchase a subscription. This could pose a future challenge for Opera or on the flip side, it could be a boon for the software company.