The Covid-19 pandemic left us with a lot of lessons, but one which stood the most was teaching the world to adopt alternatives for attending meetings and conferences rather than in-person while still getting the same value. Before the pandemic virtual events used to be the exception, only 45% of people had experienced a virtual event; now the number has doubled, about 87% have. According to a survey by Kaltura, this new trend of hosting virtual events has inspired over 90% of event organizers to plan even more virtual events in the year 2022.

Are Online Casinos Going to Jump on the Metaverse Hype Train?

Five Facts About The Metaverse You Need to Know

34% Of Gamers Are Interested In Using Crypto In The Metaverse

Virtual events and meetings are fantastic but if you like the convenience and wish the experience could be better, here is good news. Various corporations that are associated one way or the other with technology like Roblox, Epic Games, Microsoft, and Facebook, now Meta and many are all working on the next big thing in the metaverse. These next big things can provide the world with an all-new experience when it comes to virtual events.

In case you are still wondering what metaverse would do for virtual events, the metaverse will bring an all-immersive online experience, the one that makes you feel like you’re actually at the event, not just watching from the screen while wearing virtual reality (VR) goggles.  One would be able to see an entirely different environment in high definition, 3D, 360 degrees, etc.  The most interesting part is that your virtual self can actually interact with other attendee avatars and even your environment with the help of your haptic gloves or game controllers. Something like being in a PowerPoint presentation, not just watching the PowerPoint slides.

If you are still doubting the possibilities the metaverse can offer here are some of the benefits metaverses will offer over online webinars and video calls.

During a metaverse event, you get unlimited attendance. At the height of the pandemic, video game makers and software developers- Epic Games hosted a rock concert within their online game Fortnite. Over 11 Million people on the planet watched Travis Scott perform live. While the current technology is not advanced enough for these millions of people to all see and interact at the same time within the same virtual space, attendees were able to see each other in groups of 50. Travis Scott’s Astroworld was nine minutes long in total, a fraction of what’s required in a physical concert. And if he earned $1.7 million from his best show and $20 million from Fortnite, that’s more than 10 record concert nights for a showcase that was under ten minutes long. According to Forbes, concerts in the Metaverse are making artists millionaires as the most profitable concerts happen there.

Earlier in August, Epic Games delivered a virtual concert with its latest Fortnite event titled the Rift Tour starring Ariana Grande. The glittery, rainbow-infused musical journey follows last year’s “Astronomical,” a mind-bending, out-of-this-world audio adventure that brought rapper Travis Scott’s Astroworld to life in a colorfully trippy nine-minute set. In Metaverse, these concerts are much, much different. Ariana Grande worked with Epic to realize something that was cool and on-brand for her, but it’s Epic’s animators doing the heavy lifting and Grande needed to do the motion capture.

Justin Bieber is was the last pop star that brought a concert to the metaverse. This concert was put together in partnership with virtual entertainment company Wave, amid a boom in interactive virtual concert popularity that began with Epic Games’ “Fortnite.” According to Wave’s website, Bieber performed as an “avatar” in his “own virtual universe,” and fans were able to “interact directly” with the star during the concert using virtual emotes, which are pictographs the artist can see. The interactivity of Wave’s virtual concerts shared a similarity to Epic Games’ “Fortnite” shows, but the concert was performed and streamed live on Wave’s website and YouTube on November 18. 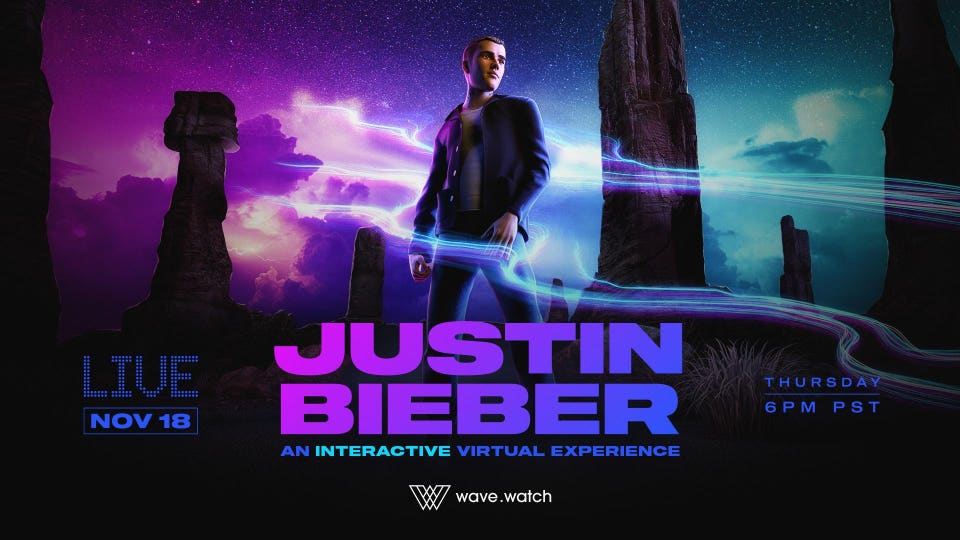 So while your next metaverse event might not be able to cater for millions of people in that space at the same time, there is the provision for thousands or tens of thousands or more at your that event just like Travis Scott’s. The NBA, NFL, and NHL all gave their eyes to the metaverse, it wouldn’t be a thing of surprise when they embrace it sooner than later. The same goes for universities that will be changing their online curriculums for inclusion of the metaverse.

Ever feel like you could make a better convention venue? Metaverse offers that. Events and conference planners have the benefits of unlimited environmental design. In metaverse there is no limit by physical construction costs, physics, or building codes, as a user, you can create conferences with as many rooms and meeting places as possible so people can attend these events or interact with colleagues. Imagine you want a pirate theme event, you can have your event on a pirate ship in the metaverse. If you want your events to take place on the moon, metaverse offers you this possibility reality may not.

Monetization may as well be one of the core benefits that come with hosting an event. In today’s world virtual spaces mean opportunities for making more money. For years, video game makers have earned a chunk of revenue from allowing users to upgrade their virtual experiences. Like physical events in the world today, there is VIP access, Platinum, and Gold access as well events. You can also add more personalized experiences that allow these people to upgrade how they interact with the environment and what they look like, also allowing access to shop for items that can then be delivered to them physically.

Of course, the metaverse is still in its infant stage and like any new technology, there are constraints in the first stages before it experiences a smooth run. These constraints exist in terms of hardware, platform limitations, and interoperability issues. While some metaverse companies are making provisions for their virtual events to be accessible from the desktop computer, the full immersive experience can be limited except for those who made purchases for expensive hardware like VR glasses, goggles, headsets, and gloves which comes at huge costs depending on the brand.

In addition to these hardware costs, the metaverse platforms come with certain limitations. Some of these limitations can be on how you can model or remodel your environment and how many people can see each other at the same time. The biggest constraint, however, appears to be interoperability between platforms. Currently, the metaverse isn’t represented by any standard, different platforms require different hardware and/or software to use, and until the standard protocol is defined this remains a challenge.

Whether you like it or not the metaverse is coming with a big bang and will definitely be the next big thing for events and conferences, the sooner you accept the better. Well in some parts of the world, the conversations these days are about reducing the screen times in our lives which is understandable, but the world continues to evolve so rapidly and these evolutions are changing our current customs so fast. In order not to be left behind in the global scope of things, now more than ever, strap in, put your goggles on and enjoy the ride to the metaverse.