Cellular network software that Ericsson announced at CES may help small, battery-powered devices like smartwatches and pet trackers get online and work longer without a recharge in a few years.

It goes by the ungainly name of Ericsson Networks Software 17A for Massive IoT, but it has features for connecting the smallest of devices without making them use up too much power. Many of those will be meters and machines for cities and companies, but some could be long-lasting wearables and consumer gadgets of the future.

Cellular networks were built to give smartphones as much speed as possible. Now they’re being adapted to trickle data to and from new kinds of things. Those could include street lights and parking meters, industrial machinery, and various consumer gadgets like clip-on devices that tell you where your stuff is.

“Anything that doesn’t require a lot of connections to the network or a lot of data, but you don’t want to be changing the battery very often” is how analyst Peter Jarich of Current Analysis puts it.

Enter NB-IoT (narrowband Internet of Things), a variant of LTE that can be deployed on current networks as a software upgrade. It will let millions of Internet of Things devices connect to the same cell, far more than today’s base stations can serve. And along with features in Ericsson’s upcoming software, it will let devices work for 10 years on a battery, the company says.

Importantly, Ericsson has at least one big customer: AT&T says it is committed to using NB-IoT, though it hasn’t given a roadmap for rolling it out.

NB-IoT is up against competing systems from specialist LPWAN (low-power wide-area network) companies like SigFox and Ingenu. They’re already in use, while the cellular industry is still trying to turn NB-IoT into a standard. The competition should help to get cell companies on the ball about building good IoT networks, analysts say. They don’t expect it to be finished for at least a year. 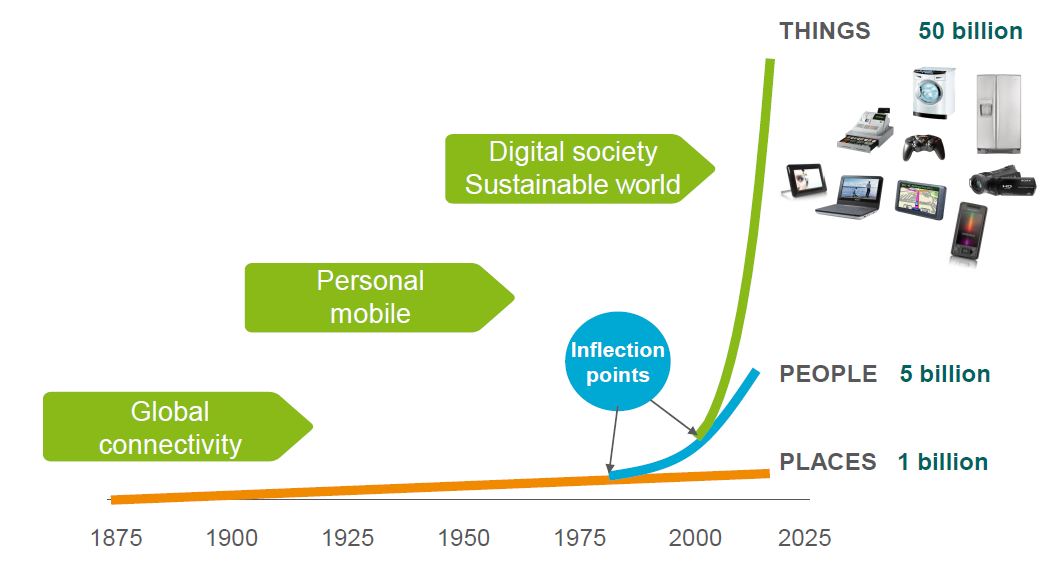 The 50 billion devices revolution by Ercisson

Upstart technologies give big IoT users some freedom to choose a service provider other than the usual mobile carriers, Jarich said. They’re especially good news for cities, which only need local service and don’t have to wait until these fledgling companies achieve nationwide coverage and overseas roaming, he said.

Companies like SigFox and Ingenu probably won’t try to act like big mobile carriers and sell service to consumers, so NB-IoT or something like it may be coming to wearables and other small devices in the coming years, Jarich said.

Some of that has already started with earlier variants of LTE. Verizon Wireless says it’s already connecting devices that use the low-power specifications LTE Category 0 and LTE Category 1. Meanwhile, AT&T says it will use a protocol called LTE-M (also included in Ericsson’s software) in addition to NB-IoT. Moves by big operators like these will help give cellular tools for IoT the scale they need to compete against the specialized networks, Jarich said.