Home General Total Solar Eclipse To Occur Today: How, When, Where To Watch It; All You Need To Know 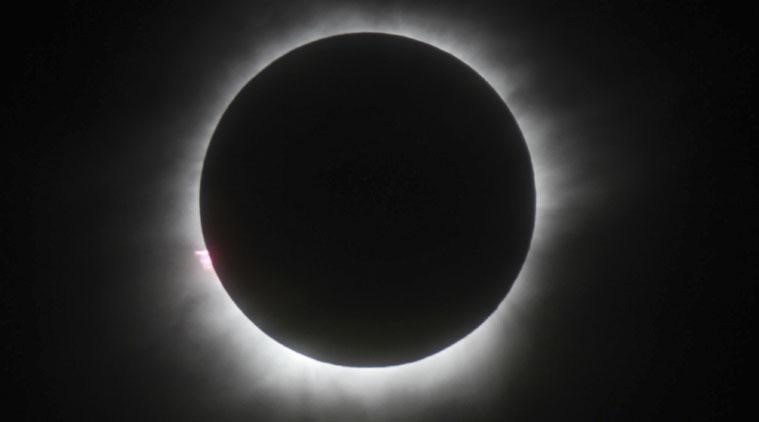 Get your telescope ready because is about to get darker and scary as Monday the 21st of August has a the total eclipse in it and it will cut across the entire United States  In totality it will cross from Oregon into Idaho, Wyoming, Nebraska, Kansas, Missouri, Illinois, Kentucky, Tennessee, Georgia, North Carolina and, finally, South Carolina, also passing over tiny slivers of Montana and Iowa which makes it special, total solar eclipse occurs every two or three years and can take long time and it happens often in the middle of nowhere like the south Antarctic or Pacific.

The eclipse will pass through the Oregon to Charleston, South Carolina, while other areas like Canada Central America and northern part of South America will experience partial eclipse in the area.

Oregon a state in United States of America is about to get busy as Americans are already gathering in large numbers at campsites to witness the once in a lifetime natural rare phenomenon to occur today in the sky, the total solar eclipse said to happen today is occurring after a long gap of about 99 years as the previous astronomical phenomenon occurred which was recorded way back in U.S. In 1918.

Not in the US? Here is how to watch it

Today’s solar eclipse is termed as ‘the Great American Eclipse ‘ , the partial phrase of the total eclipse will begin at 1546 GMT( 9.16 IST) and it will end at 18.48GMT (12.52AM IST) over the Pacific Ocean down to the South Carolina it will also be passing over slivers of Montana and lows but is said to last longer in Illinois for about 2.44 minutes.

According to NASA website, that will be streaming the total eclipse live to the rest of the world, in the report they explained “Viewers will be provided with a wealth of images captured before, during, and after the eclipse by 11 spacecrafts, at least three NASA aircraft, more than 50 high-altitude balloons, and the astronauts aboard the International Space Station.” So as to give a proper feed of what’s going on. And make them feel they are watching it live under the sky.  However, other news channels will also broadcast the eclipse live.

According to NASA , as mention in their recent post explaining the different phrases that will occur during the total solar eclipse, they explained that the initial phase, the sun’s disk will be blocked partially by the moon which should last over an hour and can be viewed with pair of specially designed glasses. Phrase two of the eclipse the moon will create a very bright flash of light in its valleys given it a round diamond ring shape and with the sight of those ring round the moon, it’s said to mark the final moments before the takeover. At the edge of the moon the valley will allow a shimmering light to pass through and the crescent will begin to peek from behind the moon which will lead to the complete solar eclipse.

Try not to miss today’s rare natural phenomenon because you may have to wait till 2019 over Argentina , Chile and South Pacific or wait for another one in America which will pass through mainland Texas, Midwest, Indianapolis, Cleveland, New York.