It’s another first from Europe.

This week, France unveiled what it called the first road paved in solar panels. Located in Normandy and Tourouvre-au-Perche to be precise, it is a 1Km road with one of its lanes covered totally by small solar cells that look like your average bathroom tiles. The road is expected to see about 2,000 vehicles pass it a day in a town that has about 3,400 residents. The panels are covered in a special silicon film that protect them from the weight of bigger vehicles. 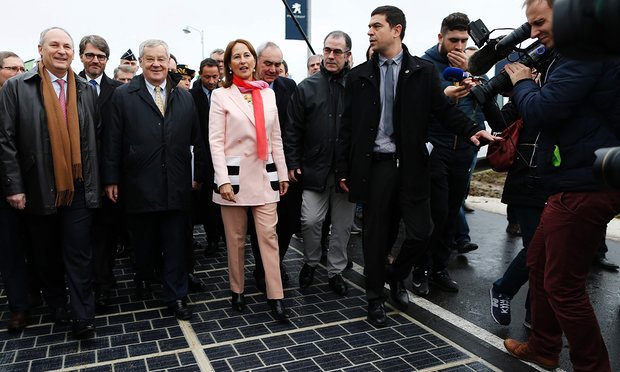 Ségolène Royal while inaugurating the project

Before critics would even have a thing or two to say about the €5m project, Frace’s environment minister who is also a former presidential candidate Ségolène Royal said she would like to see the project replicated across the country. In her words, she said would like to see solar panels installed on every 1,000Km on French highways and if you care to know, France has about 1 million kilometres of roads. So if cost €5m to complete this one, critics are then asking whether it is a good use of government funds seeing as there are other pressing social and environmental situations across France. As the Guardian noted, Critics say it is not a cost-effective use of public money. Marc Jedliczka, vice-president of Network for Energetic Transition (CLER) told Le Monde: “It’s without doubt a technical advance, but in order to develop renewables there are other priorities than a gadget of which we are more certain that it’s very expensive than the fact it works.”

Another question people are asking is whether it even makes sense to set up such a project in a town that’s not even known to have abundance of sunshine. Normandy has on average 44 days of good sunshine in a year.

The minister though says before you talk about the cost of doing this, the idea is to see whether these panels could in fact generate enough electricity to power the street lights in Tourouvre-au-Perche.

While France may be the first to unveil this kind of project for vehicles, Dutch company SolaRoad built a solar-powered bike path back in 2015 but as a Quartz report notes, it’s possible that this road will suffer the same issues. SolaRoad’s bike path can generate roughly 3,000 kilowatt-hours of power, but the estimated cost of building it was equivalent to paying for 520,000 kilowatt-hours’ worth of power.

The constructor of the French roads is called Colas, part of giant telecoms group Bouygues but the project was paid for by the government.