A SpaceX Falcon 9 rocket was on Thursday used to launch the SES-10 communications satellite from the Pad 39A at NASA’s Kennedy Space Center in Florida. Besides the fanfare associated with such a launch, the big news was that it marked the first time SpaceX would launch a re-used rocket which is revolutionary in the sense that the cost of future explorations would be greatly reduced.

Less than a year ago, “the Dragon booster and its nearly 7,000 pounds of cargo headed for a rendezvous with the International Space Station.

The booster landing — not exactly in the center of the platform but enough to keep the equipment from getting wet in the Atlantic Ocean — bolsters SpaceX’s confidence that it can regularly recover rockets that could be flown again, lowering launch costs.”

On Thursday though, the team at SpaceX had reason to celebrate as the Falcon 9 rocket successfully landed on a platform on the Atlantic which Elon Musk says rendered him speechless.

Fresh off this success story, SpaceX says it plans to launch the Falcon Heavy rocket this summer using two boosters. SpaceX Founder and CEO Elon Musk said “Falcon Heavy is one of those things that at first it sounded easy,” Musk said. “We’ll just take two first stages and use them as strap-on boosters. And like, actually no, this is crazy hard, and required a redesign of the center core, and a ton of additional hardware. It was actually shockingly difficult to go from a single core to a triple-core vehicle….. Our expectation is probably a late summer launch of Falcon Heavy.” 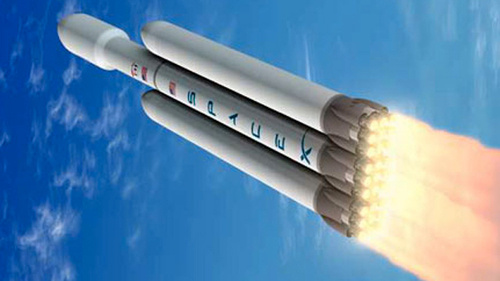 Now the Falcon Heavy should be able to loft more than 54 metric tons to low Earth orbit, 22 metric tons to geostationary transfer orbit, or 13.6 metric tons to Mars. The rocket cores for Falcon Heavy’s flight are about three months from completion and he has said upon completion, “We will probably fly something really silly on Falcon Heavy because it is quite a high risk mission,” instead of important stuff in essence.

If all goes well, they plan to recover all boosters from this summer’s launch by landing at the Cape Canaveral Air Force Station and that will be followed by the centre core landing on the Atlantic.

Musk also said SpaceX is prioritizing fulfilling launch commitments to its backlog, which is mainly waiting on Falcon 9 missions. A number of those customers have faced protracted delays and some, such as Spaceflight Inc., have sought alternative launchers after the wait became too much to bear.