Apple wants to change the way you pay for goods both in stores and online.

Today, it introduced Apple Pay, a mobile payments service built into its new iPhones and new Apple Watch that will let shoppers tap their phone or watch at checkout terminals to purchase items without a credit card or cash. Apple Pay will also let iPhone users buy things in apps with one touch using the credit card on file with iTunes, a move that challenges established online payment companies like PayPal.

The new mobile payments product will work at a wide range of big-name retailers such as Whole Foods, Macy’s, McDonald’s and Walgreens, Apple said. Apps from Target, Groupon and Instacart will let their users pay with Apple Pay. This means new users to these apps won’t have to fill out credit card information if they choose to pay with Apple Pay. It will be available in October.

“Most people who have worked on this have started by creating a business model that was centered around their … interests instead of focusing on the user experience,” CEO Tim Cook said today at Apple’s big product event in Cupertino, Calif. “We love this kind of problem. This is exactly what Apple does best.”

Apple Pay could become an important new revenue source for the company, which relies on new products to drive sales. Apple could take a small cut of each transaction and/or a small fee for each card stored in the digital wallet. In the long term, a successful wallet could help attract new customers to Apple devices and retain current ones who were thinking about leaving. 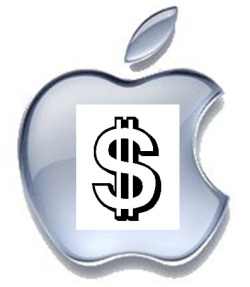 IPhone 6 and 6 Plus users will touch their thumbs against the phone’s Touch ID fingerprint sensor as they tap to authenticate the transaction. The system uses NFC, a wireless technology, to transmit payment information. The new iPhones and the Apple Watch are the first Apple devices to include the technology. It’s not clear how Apple Watch payments will be authenticated without a fingerprint sensor.

People can load their Visa, Mastercard or Amex debit or credit cards into Apple Pay by taking a picture of their card. They can also use the account they already have on file with iTunes or the App Store. It’s not clear whether Apple will let users easily swap out one card for another after they choose their first card account to use.

Not surprisingly, Apple stressed the security of the system in the wake of its iCloud celebrity photo scandal and large security breaches in the stores of retailers like Target and Home Depot. The iPhone won’t store actual card information, Apple’s head of software and services Eddy Cue said at the event. Instead, the phone stores an encrypted placeholder ID and only passes that along to the store’s checkout system. That number is eventually matched up with account information being held by a credit card company or bank, but is never seen by a checkout person, Cue said.

“Each time you pay we use a one-time payment number along with a dynamic security code,” he said.

There are still big questions remaining. Paying with cash or a card isn’t difficult, and mobile wallets so far haven’t provided enough additional value to change that behavior. How will Apple change that? Separately, no matter how secure Apple’s mobile payments system is, some customers may feel uncomfortable using it in light of the recent hack of celebrities’ iCloud accounts.

Shoppers in the U.S. have so far failed to widely adopt mobile payment schemes like Google Wallet or ones derived from the wireless carriers themselves, but industry analysts and executives believe Apple can change that. One key difference here is Apple makes both its phones and its operating system, so wireless carriers can’t block customers from using Apple’s mobile payment technology as they did with Google. Apple’s mobile payment system will be fully integrated in its phones, and if a carrier wanted to block the technology, it would have to stop selling the new iPhones altogether. That’s not going to happen.