Google is investing $11.5m in racial justice. The $11.5m will be divided among about 10 causes while a majority of the funds will go the Center for Policing Equality (CPE). Receiving $5m of the fund, the CPE according to the Google announcement is using data to measure police behaviour with respect to different races. So according to the chart below, the police is more likely to employ the use of force for black resident than for their white counterparts. In fact they say it’s 2.5 times as high as the overall rate and 3.6 times as high the rate for white residents. 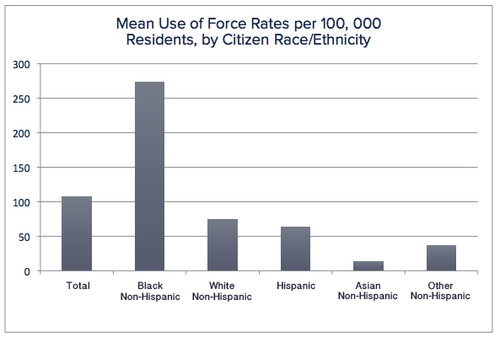 Mean use of force by the Police wit respect to race. Source: CPE

But Google thinks proper data by organisations like the CPE collection could be a major step in dealing with the problem.

The CPE is not the only one receiving huge grants from Google. Measures for Justice will get $1.5m as it aims to create a “first-of-its-kind” web platform that provides data on the local justice system treats people using data like crime history, status and age among others. W. Haywood Burns Institute gets $500,000 is getting the data from organisations like the Measures for Justice to the criminal justice reform organisations for the purpose of making informed decisions.

Racial tensions were on the rise last year especially following the death of unarmed black residents who the police believe may have armed at the time of their shooting. Even Facebook was nearly caught in the tension when it temporarily blocked a video by a Minnesota woman named Diamond Reynolds who  went  live with the entire incident with respect to the shooting of Philando Castile (her fiancé by) a police officer.  Her four year old daughter was in the back seat and saw how it all went.

But while Google can be commended for this initiative, others think Google could be part of the overall problem. Google’s search algorithm has been accused of racial bias and last year, Kabir Alli, an 18-year-old graduating senior from Clover Hill High School in Midlothian, Va., posted a video clip on Twitter this week of a Google image search for “three black teenagers” which turned up an array of police mugshots. He and friends then searched for “three white teenagers,” and found groups of smiling young people.

That said, this won’t be the first time Google will be bringing the weight of its deep pockets to subjects like this. In 2015, the internet giant announced plans to raise $11m for organisations attending to the needs of migrants and refugees crossing over from Syria to Europe.